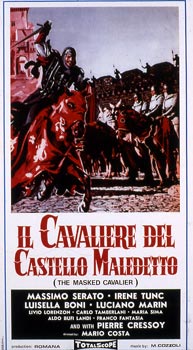 Ugone puts his uncle, count Oliviero, king of Valgrande, into prison and tries to obtain a document from him saying that all the rights to his property and throne should be left to him. But the count refuses to sign. Therefore, Ugone calls for Oliviero's daughter Isabella and offers to marry her, becoming this way heir to the throne. In the meantime, he imposes heavy taxes on the peasants who rebel, helped by a mysterious rider. Ugone hopes to change Isabella's feelings, but she still refuses him. One night the masked rider dares to enter Isabella's room but he is seen by Ugone's soldiers and miraculously manages to escape. But a friend of the countess informs her that the rider has been killed. Desperate, Isabella consents to marry Ugone to save her father. But during the wedding the rider reappears. Ugone tries to escape, but he is killed by Monna Fiamma who wanted to take her revenge for having been abandoned by him.