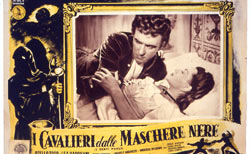 In the 17th century, Sicily is forced to live under the heavy yoke of foreign rulers. The mysterious sect of the "Beati Paoli" fights for the rights of the poor people. Violante, engaged to the peasant Blasco, is kidnapped by the guards of a local squire. Blasco is an orphan who has been brought up by pious monks and he swears to free his bride. He goes to Palermo to seek the help of the captain of justice who also names him commander of the guards. He eventually finds Violante, who is kept prisoner by the captain's brother. Blasco wounds his rival, but loses track of his beloved once again. After various adventures, Blasco finds out that the captain is his uncle who had his brother murdered in order to inherit the family fortune. In the end, the captain of justice is put to death by the Beati Paoli and Blasco can marry his dear Violante