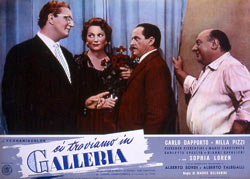 Gardenio, an old and unlucky artist, organizes little tours in small towns. By chance he discovers Caterina's vocal talent, hires her, and shortly after marries her. She turns into a true star but Gardenio, feeling useless, decides to seek success on his own. Finally his talent is understood, but when he finds out that Caterina had secretly financed the show... he thanks her publicly and the two return together!