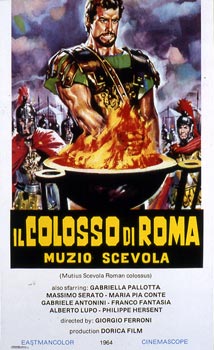 Rome is besieged by the Etruscans. Their king, Porsenna, has been induced to this by the exiled Roman King, Tarquinius. Mutius decides to go and kill Porsenna in his own camp. Having missed his target, he is caught and burns his right hand to punish it for the mistake. Porsenna wishes to enter into negotiations with the Romans, but Tarquinius kidnaps Clelia, Mutius' bride-to-be, then imprisons Porsenna and his son, Arunte, and engages the Romans in a decisive battle. Arunte frees himself and, together with Mutius, they attack Tarquinius' troops. The battle is finally won by the Romans when Mutius kills Tarquinius showing that he can use his left hand as well as his right.