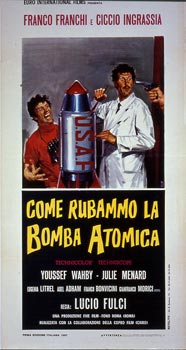 Franco is on a Sicilian fishing boat when he sees a B 52 plane with an atomic bomb on board disappear into the Mediterranean. The secret services of a great power start looking for the bomb; the "Spectrales" organization is also after it, as a speculation; and so is Dr. Si, a mad scientist. Ciccio, who works for the Spectrales, captures Franco, but when he learns that Franco does not have the bomb, and afraid of losing his job, he gets Franco to agree to make a false bomb together. Franco meets and falls for beautiful Cinzia who works for Dr. Si. After a series of hilarious circumstances, Franco and Ciccio catch a strange fish in their net: the Bomb.