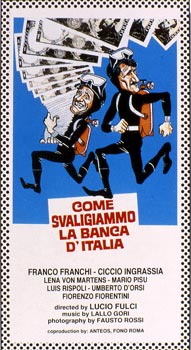 A funny film full of laughs. A very experienced and highly qualified "bank robber" is very upset because in his family, which has a long tradition of famous thieves, there are two imbeciles: Franco and Ciccio, his brothers. Each time the two try to carry out a robbery, they inevitably fall into the police's hands. So the "bank robber", to keep them out of trouble, hires a butler to look after them, and he also finds two imbecile girls to keep them company. Franco and Ciccio, to show that they are not inferior to their relatives, steal the files containing the plans of a robbery which is to take place at the Banca d'Italia by their brother. They hire a gang of idiots and set out to rob the bank in a slap-stick manner. As soon as the "bank robber" hears of their theft he runs to the bank to help them. After innumerable blunders, the "bank robber" ends up in jail while the two brothers become two wealthy gentlemen.