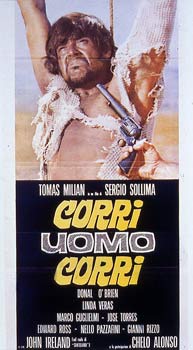 Cuchillo, in jail for theft, escapes with Ramirez to the village where bandit Riza is looking for a hidden treasury. Ramirez is killed but reveals the secret to Cuchillo... Two french agents are on his heels, but when they are about to get their hands on the gold, one of the two passes on Cuchillo's side! While the agent takes the treasury to a revolutionary group fighting for democracy, Cuchillo has the task of leading the bandits in a wrong direction...and he is known to be the fastest runner in the West....