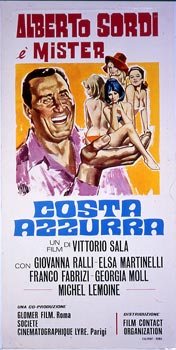 The Cote D'Azur, with its fascinating sea and golden cliffs serves as a magnet that draws the wealthy, the young, the old, the lovelorn to warm their spirits and unfulfilled dreams. This film gives quick glimpses and sensitive vignettes of the variety of characters in the passing parade. A young couple, provincials, accustomed to the boring life of the countryside, split asunder when the girl enters a contest and wins "for the most beautiful legs", a shock for the simple man; the gossip writer, the nice young girl being "kept" by an elderly millionaire who buys her clothes, jewels, everything she has never had, but looks upon her as an inferior being... she doesn't like it, but won't give up all the "goodies"; a young woman and her husband, fruit sellers - she wants to get into the movies, but the director prefers her husband. On and on it goes as the dreamers move to the Cote d'Azur, some continue dreaming and others wake up with a jolt.