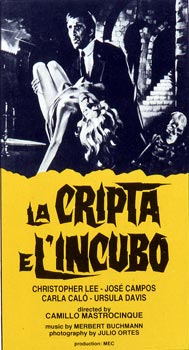 In the ancient casle of Karnstein live Count Ludwig and his daughter, Laura, who suffers from continuous nightmares. To dispel suspicions that his daughter is the reincarnation of a long dead ancestress of the Kernsteins, Count Ludwig calls in a young scientist; Klaus. When Klaus is about to explain the mystery, the Count's refusal to allow him to continue his studies blocks everything. The refusal is followed by a number of murders; a folksinger, a maid and Laura's old foster-mother are killed one after the other. The Count withdraws his opposition to the investigations and Klaus feverishly resumes his research and the mystery is explained: at the root of all the monstruous events is Lyuba, a fragile maid who no one would have suspected.