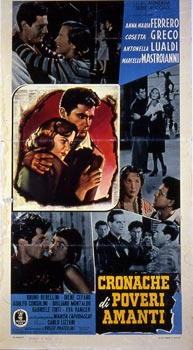 An intrigued story of love and friendship among poor and simple people, in contrast with the period they're living in, in a bright and well set up picture that describes in detail the struggle of the lower classes against fascism. It's 1925. Mario, a young printer, is engaged to Bianca. He prefers to choose his friends among antifascists and these are Maciste, a blacksmith, owner of his apartment, Ugo, a greengrocer, and Alfredo. One day Alfredo is badly beaten up by a fascist and he is taken to hospital. At the hospital Mario falls madly in love with Alfredo's wife named Milena and thus leaves Bianca. Soon there is another fight with the fascists, Maciste is killed, Ugo is wounded and takes shelter in the house of a famous woman moneylender where he falls in love with the maid, Geniuna, who he will later marry. Alfredo is killed, and Mario as respect for his dead friend decides to leave Milena. A little later he is arrested by the fascist police.