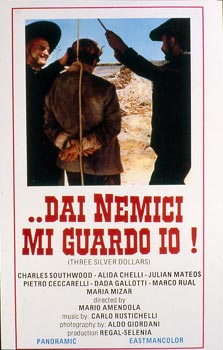 A major of the dissolved southern army gives a dollar to a young cowboy, Alan Burton, telling him that there are two other similar dollars with different figures on them; the three numbers combined show the spot where the Confederate's treasure is hidden. A number of people get involved in the search. At the end only two survive: Alan with two of the dollars and Hondo with one. Hondo tries to shoot Alan dead; the dollars in his coat pocket protect him from the shot but unfortunately the bullet has effaced the figures on the coins, so the treasure will remain hidden forever.