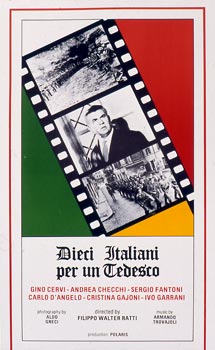 Three platoons of German military police march down a quiet street in Rome. As the Germans approach a sweeper's cart, it explodes killing thirty of them, two will die later. The German officer orders the arrest of the pedestrians and the inhabitants of the street. They are taken to the prison of Regina Coeli. The German Colonel Kappler decides that ten Italians must die for every German killed and makes a list of political prisoners, antifascists, partisans, some Jews and others chosen at random. Kappler ignores any plea for clemency from the various authorities and orders the men to be taken to the Ardeatine Caves where they are massacred. Three hundred and twenty in all.