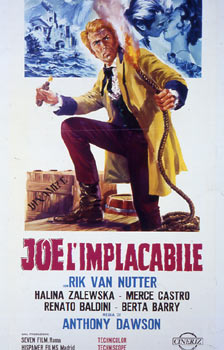 In order to put an end to the numerous ambushes to the gold transports which are a real menace to the finances of the American government, the agent Joe Ford is entrusted with controlling the next transfer of a huge quantity of the precious metal. Joe Ford, called Dynamite Joe due to his liking for explosives, is seduced by Betty and miraculously escapes various attempts on his life. In Mine City, Joe has a carriage built entirely of gold, but senator Senneth is told of the plan and makes an alliance with the bandit El Sol in order to get hold of the gold. At Fort Brent, Joe tries to defend the carriage from the attacks of the bandits, but in the end senator Senneth takes off in the carriage he thinks is the one made of gold. A little later, Joe is joined by the reinforcements he has asked for and he can finally deliver to them the real gold carriage and tell them about the evil plans of senator Senneth