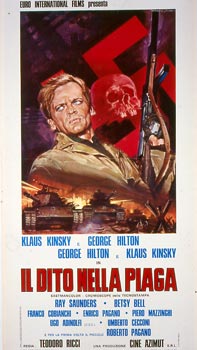 Two U.S. soldiers, one black, one white, are sentenced to death for crimes committed during the war. The command of the execution platoon is given to a young lieutenant who leads his men too far away from their post and they are attacked by the Germans. Only the lieutenant and the two condemned men manage to survive. They find some weapons and a jeep and with it they reach a nearby village. In the square, the three men are greeted with cries of joy from the population who acclaim them as liberators and who give them an enthusiastic welcome. In the days that follow, when it seems that peace has at last returned, the black man makes friends with a lonely child, Michele, who becomes very attached to him, and his companion falls for Daniela. But peace doesn't last. The Germans soon attack and the three men decide to defend the population, succeeding. However, the two men die as heroes while the lieutenant is saved by the U.S. Army.