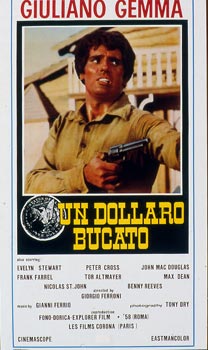 At the end of the war of secession, two brothers, Phil and Gary, leave their homeland to go and seek their fortune elsewhere. At Yellowstone, Gary is hired by the highly unscrupulous Mac Cory who uses him to kill a stranger who had been interfering with his shady dealings. Too late Gary recognises the stranger as his own brother, Phil. Mac Cory's men then try to shoot Gary, but he is saved by a dollar that he keeps as a memento in his waist-coat pocket. When he has recovered his senses, Gary returns to Yellowstone to settle the affair, but he finds himself in deep waters there as well. His wife, Judy, has fallen into the hands of Mac Cory and the sheriff to whom he turns for assistance turns out to be one of the same band of outlaws. Despite having the cards stacked against him, the brave young man manages to chase the band out of the town, wins the respect of the townsfolk and the chance of a new start with Judy.