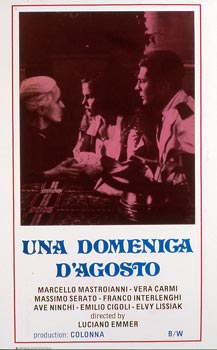 On a summer Sunday most people go to the sea-side. Among them is a taxi-driver with his family; some young boys are cycling; a poor girl rejects her boy-friend, who is unemployed, and accepts the invitation of a rich man. A widower and a noblewoman, after having sent their kids to a holiday camp, spend the day together, free at last. Back in town, a pregnant maid meets her boy-friend to go and look for a flat in order to get married. As they leave, in the house where the girl works a fire breaks out because of her carelessness. Things begin to go badly for everyone else, too. The man who is unemployed and rejected by his girl is caught "red-handed" in a robbery. The taxi driver's daughter and a cyclist each pretend to be someone they are not and, after a small affair, they discover each other's origins. In the meantime, the widower becomes anxious to fetch his daughter and the poor girl gets a real disappointment with her wealthy boyfriend.