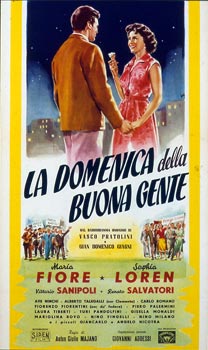 The film takes a look at a few characters at a football match. An ex-soccer player in need of money places his hopes on a coaching job with the Naples soccer team, playing that Sunday; but Naples loses and the would-be coach is out of a job. That Sunday, a retired worker who does the football pools hopes to win the 300.000 lire he badly needs: he is over-joyed when he thinks he has a first prize ticket and desperate when he finds out it's only second prize. He has won only four million which doesn't seem much now. At the same game is Giulio, Maria's fiancè. He's out of work and Maria hopes her uncle may give him a job, but Giulio prefers the stadium. There he meets a young woman who is chasing her lover who has left her pregnant. Giulio comforts the woman, who's come to murder her ex-lover. Soon she sees him and searches for her gun but Giulio has prudently taken it. Maria and Giulio fight over the lost job but everything works out well in the end for everyone.