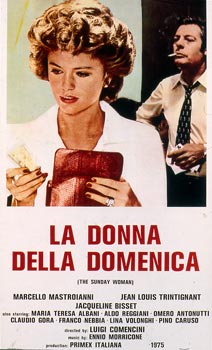 Santamaria, a police inspector, is in charge of solving the murder of an architect. A blonde woman was seen running away from the murder scene with a strange object in her hand. The murder weapon is a marble penis. An anonymous letter leads Santamaria to suspect of Anna Carla and her gay friend, Massimo, both members of Turin's best society. Massimo's "friend" Lello works for the town council; in an attempt to clear Massimo, Lello looks through various corruption accusations that are documented in the files in the town hall. Lello is killed, but his murder will finally allow Santamaria to uncover the assassin and spend the rest of the day, Sunday, with Anna Carla