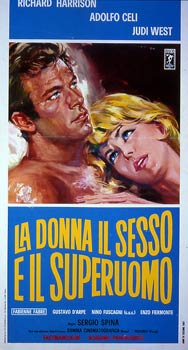 Kidnapped by false policemen, Richard is taken to the secret headquarters of the Fantabulous Inc. to be transformed into a superman called F1. While his inventor negotiates his sale to foreign powers, the sight of his girlfriend operates an incredible change in his mind... turning F1 into Richard again! Disgusted by the idea that science could create horrible monsters by diverting normal men, Richard destroys the computer that was ruling his mind.