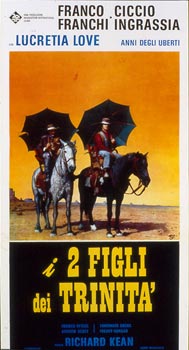 DUE FIGLI DEI TRINITA’ (I)

Calamity Jane is the aunt of the Trinity brothers, Franco and Ciccio, who run a service station for cowboys. Just when the station is getting on its feet, it is robbed by Requiem and his band, but Calamity Jane catches the thieves and hands them over to the sheriff. She then gives her nephews a treasure map which marks the spot where they can find untold riches. However, "four aces" swindles them out of it and gets to the treasure before them. Even when he is forced to give it up, the Trinity brothers' troubles are still not over as Ciampa's band is causing trouble back at the service station. This time, Franco and Ciccio are helped by a group of monks, whom they had previously assisted. Finally, with the help of some inherited funds, the brothers enlarge their service station and it becomes a centre for visitors, locals and large groups.