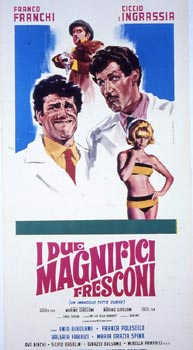 Ciccio and Franco, two cowards who are relatives of a Sicilian mafia boss, are sent to Milan to sell a huge lot of wine. Due to the fierce competition by some shrewd merchants, however, they are unable to sell a thing. They learn from the behaviour of their competitors who always have beautiful women at their side: Franco and Ciccio ask their wives to come to Milan from Sicily, and in Milan the two women soon turn into fascinating ladies and, attracted by the beautiful life in the big city, get tired of their husbands and leave them. Meanwhile, the father of the girl, worried by the news that are arriving from Milan, sends two mafiosi to the city in order to have Ciccio and Franco killed. In order to stay alive and get hold of a little money, they go to Rome and on the beach they first try to steal a ring from a woman and then pretend to be vets. A little later, a young man comes to see them: he is the lover of one of their wives but married to a rich and ugly woman whom he wants to die. After many useless attempts on the lady's life, the man himself will be the one to die. Tracked down by the mafia, Franco and Ciccio have to flee once again