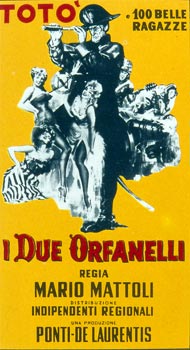 This film takes place in Paris in 1865. Gaspare and Bastiano are two orphans. One is the vice-headmaster and the other the gardener of a girls' orphanage. Bastiano goes to a fortuneteller to find out about his parents. He is told that he is the son of a wealthy duke, but that his place has been taken by an usurper who now lives in the duke's palace with his mistress. Accompanied by Gaspare, whom he has appointed his administrator, he occupies the palace and begins a pitched battle with the usurper and his mistress. In a series of miraculous escapes from his enemy's tricks and ambushes, he disguises himself as Napoleon while, in the meantime, Gaspare learns his own father was the Paris executioner. This film gives the authors the opportunity to joke about aristocracy, duels, war and justice. At a certain point we realize that the whole film was a dream. Bastiano has not lived this fantastic adventure, but dreamt it.