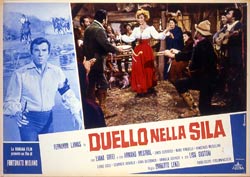 Southern Italy, 1850: Antonio leaves for Lagonegro to seek revenge for the murder of his sister by bandit Rocco Gravina, well known for his cruelty and ruthlessness... The help of a local girl and an English journalist will be of great assistance to him, but when his true identity is discovered, the bandits want him dead! In a dramatic duel of honor with Rocco in an abandoned cottage, Antonio kills the boss and five of his men but... alone against the whole band he is in a hopeless position! More blood will flow on the Sila mountains...