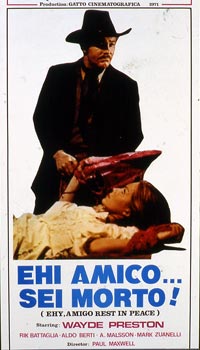 Barnet, a bandit, and the eight men of his band lie waiting in a Texan village. Having confined the people of the village to their homes, they rob the stage-coach which arrives in town carrying a cargo of US $ 100.000 in gold. After the robbery, the bandits take refuge in a deserted mine but a post officer, Dove Williams, is on their track. Williams overcomes innumerous difficulties and finally locates the bandits' hideout. Then, single-handedly, he wipesout the whole gang except Blackie who manages to escape, but Williams - believing Blackie to be in possession of the gold - is hot on his heels. The hunt ends with Blackie's death but, to Dove's amazement, no gold is found on the dead man; it has been taken by El Loco, a Mexican vagabund who, sure to have fooled Dove, is on his way to safety in Mexico. Finally, Williams discovers the truth and succeeds in recovering the gold just in the nick of time.