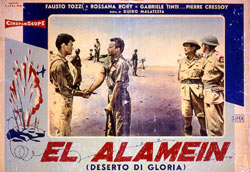 Sergio is about to get married to Nancy, an English girl he met in a night-club, when the war starts. Sent to Africa, he will live the experience of a dangerous battle in the desert to defend the allies' position. Their commander dies and Sergio suddenly finds himself in charge, with only his superior's diary to give him the strength to resist... But the last attack is too strong, several soldiers die and the wounded are taken to the Cairo hospital where - separated by the war - the two lovers... meet again!