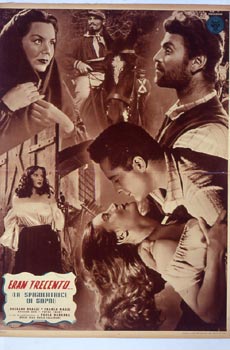 In 1857 in Lucania there are various gangs of liberals led by a mysterious chief named "Volpintesta", who is none else than Paolo, the fiancée of Lucia who has to accept don Franco's hospitality when Paolo has to go into hiding. Even if he is a liberal, don Franco fears no ambushes since he is the brother of a general of the Bourbons. During the night, don Franco, who's in love with Lucia, enters her bedroom and tries to kiss the girl, but Lucia fiercely opposes his advances. She is saved by Paolo who takes her to his hideout in the mountains. Pisacane is near: the patriots under Paolo's command have all been mobilized to go and join him. Even don Franco joins up with them, since his brother has been killed. His feelings have changed and he asks the girl to forgive him for his actions. Lucia will be the gleaner indicating the way Pisacane and his men have to follow. But the populace, incited by the Bourbons, helps the troops to defeat the patriots who are scattered and massacred. Paolo takes refuge on the mountains, from where he will then join Garibaldi's troops