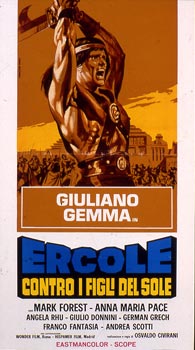 After much hardship, Hercules arrives at a distant land. He is the only survivor of a band of bold adventurers against a number of ferocious warriors, thanks to the timely intervention of the Children of the Sun who are of the royal race of the Incas. Atahualpa usurps the throne at King Hauscar whose daughter, princess Yamara, is his prisoner. He orders the priests to prepare her for a sacrifice. Just when the ceremony is about to take place, Hercules with prince Maytha and a few men rescue her. Hercules and the princess fall in love. An epic battle is fought and the machines prove decisive. King Hauscar takes his life and Maytha and Hercules are victorious after two ferocious fights. Amid the jubilation of the populace, Hercules and Yamara are married.