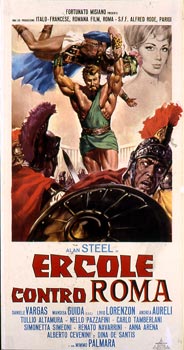 In Ravenna Afrus, the Prefect of the Pretorian Guard, conspires against the Roman Emperor Gordian with the aim of usurping his power. He also wishes to force Gordian to give his daughter Ulpia in marriage to his own son Rezius. On hearing that Traianus has been victorious against the powerful political parties and that he is on his way to Ravenna, Afrus has Gordian killed by Mansurius and his henchmen. At the same time, he tries to capture Ulpia. But the girl, together with her nurse Arminia, is saved by Hercules who had come from Pannonia. Afrus is proclaimed Emperor and Traianus is sent to Pannonia.