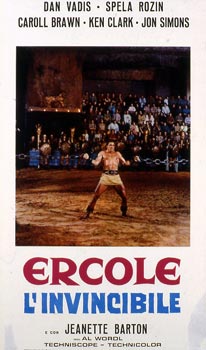 The young daughter of King Teica is attacked by a lion, but she is saved by Hercules who falls in love with her. Her father promises Hercules he can marry her only if he kills a dragon that terrorizes his people. Hercules succeeds in this difficult task, but on return to the village finds it destroyed by the tribe of Demios, who lives in the crater of a dead volcano. After various dangerous adventures, Hercules succeeds in freeing the princess, but her father has been killed by a rebel, head of the Demios Hercules rids himself of the enemy and frees the prisoners along with Teica.