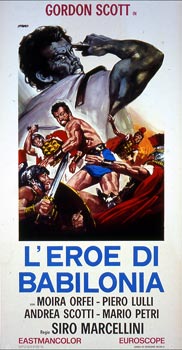 Balthazar, usurper of Babylon, oppresses the city with violence and outrage. Nipur, the legitimate heir to the throne, raised in exile and educated by Cyrus, King of Persia, returns to his country with the intention of recovering the sceptre left him by his father and to bring back order and justice to Babylon. During the journey, Nipur frees Tamira, a Jewish girl who is to be sacrificed to the goddess Itar by Balthazar's men. Having discovered Tamira's hiding place, Balthazar easily captures Nipur and throws him in jail. However, Nipur manages to escape and, helped by his friends, opens the doors of Babylon to Cyrus' army. Balthazar is stabbed to death by Nipur, who takes over the throne of Babylon with Tamir by his side.