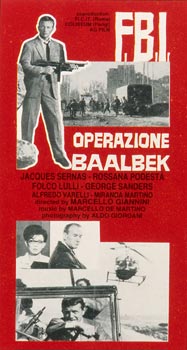 For some time a vast organization has kept the F.B.I. in check eliminating its best agents. Before dying, one of these agents has managed to murmur a name to his chief. Working on this clue, another agent, together with the Beirut police, continues investigations. Pretending that he is involved in an illegal drug racket, the agent manages to befriend the gang and, at a suitable moment, notifies the Lebanese police, thereby enabling them to arrest the gang members. Only at this point do we learn that the mysterious agent is none other than a beautiful girl who has lost her head for the chief of the organization, who escapes capture but is eventually tracked down by the police at the Baalbek ruins. During a dramatic gunfight, the beautiful agent attempts to save her loved one, but fails and he dies in her arms.