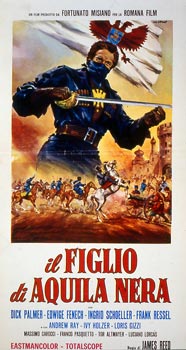 Violent and spectacular fights take place when the Cossacks are led by Alessio Andrejevis, son of the famous Black Eagle, who has become notorious for having wiped out the anti-Cossack revolt and their commander General Volkansky. In a fierce counter-attack in the governor's palace, three of Black Eagle's men are caught, imprisoned and sentenced to death. Alessio tries to free them, but is caught in the attempt; fortunately, a young girl, Natascia, Captain Romanoff's niece, helps them to escape. Volkansky finds out about the escape and along with his army follows their track. A violent battle takes place and Volkansky is killed during a duel. It is then that Black Eagle orders Romanoff to have the Czar grant the Cossacks freedom and independence. A film full of power and romance.