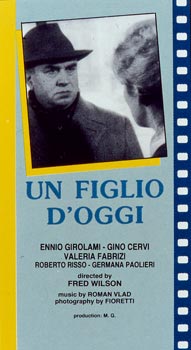 Renzo gets mixed up with Laura and Raul who work with Riccardo in drug dealing. Renzo steals a bracelet and Raul sends him to a goldsmith who receives stolen goods. Soon Raul and Renzo prepare a haul: they meet the goldsmith and a quarrel breaks out between Raul and the jeweller: in the struggle, Raul, who has a revolver in his hand, pretends to be killed by the goldsmith, and Renzo offers to relieve the latter of the so-called body and to keep quiet, on condition that the goldsmith gives him a large sum of money. Until one day Renzo and Raul quarrel, but this time Raul gets killed. Renzo calls Riccardo who burns the body while Renzo phones the police, laying the blame on the goldsmith. Then he rings up the goldsmith and offers to escape with him, seen that the police know everything. In the end, convinced by his father, Renzo gives himself up.