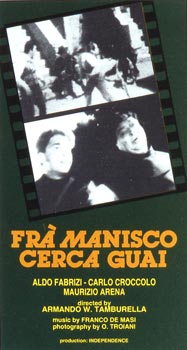 A fictional and humorous episode in Southern Italy in 1860. While Garibaldi is about to liberate Naples from the hated Bourbon dynasty, two friars arrive to build a church, but get caught in a skirmish. Meanwhile, Giulio Massena, a liberal guerilla leader fighting the Bourbons, is trying to elope with Maria, the daughter of the local robber baron, Don Liborio. The evil baron lays an ambush for Brother Manisco who is rescued by Massena. Garibaldi's troops arrive just in time for a battle with the baron's retainers. A final and general pacification takes place through the mediation of Brother Manisco, the baron marries his mistress Carmela and gives his blessing to Massena and Maria.