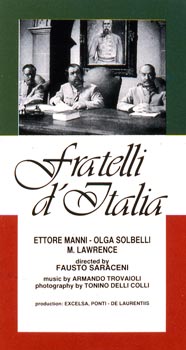 Capodistria, 1915: Nazario Sauro, Captain in the Austria Mercantile Navy, in order to escape arrest takes refuge in Venice. When Italy declares war to the Austrian-Hungarian Monarchy Sauro enlists in the Royal Navy on board the submarine "G. Pullino". His perfect knowledge of the Istrian Coast gives him an opportunity to render notable service to his country. The "Pullino" goes very close to an Austrian base; the reconnaissance is a complete success but costs the life of Sergio, a devoted sailor to Sauro. On the return journey, the submarine runs aground near the Austrian Coast and is blown up by the crew, who try to escape but are captured. The Capodistrian, who is serving under a false name, is recognized but, loyal to the orders received, denies up to the end to be Sauro. His heroic mother, trying to save him, declares that she does not know him. Torn with grief, she watches her beloved son taken to the scaffold.