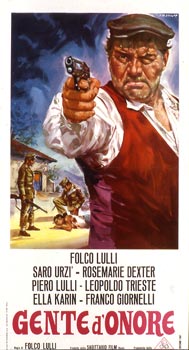 In Sicily the police has set up an operation that should wipe out the mafia definitively. The main suspects, whose arrest could lead to the heads of the Organisation, are seven killers who are hiding in the remotest places. Nevertheless, under precise intructions of "Cosa Nostra" these seven men undertake a difficult journey through the island to reach a ship that will take them safely abroad. Apparently, a strange fate is upon this team, since every day one of its members accidentally dies; at the end of the trip it becomes clear that the mafia has betrayed them and has prepared a police ambush for the two survivors. But Turi, the eldest and the shrewdest of the lot, the one who had led them in their journey, escapes from police and mafia and succeeds in going back and taking revenge on the secret leader of the Organisation.