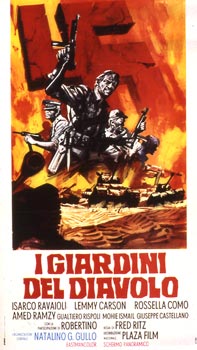 1942. The Anglo-American Army and the Africa Corps are face-to-face in the desert, separated by some mine-fields which the soldiers have named "the devil's garden". A huge German fuel deposit supplies Rommel's army in North Africa and an allied "commando" has to blow it up. Commanded by an English major, the patrol, after various ups and downs, is reduced to only six men and three prisoners: a chaplain, a Red Cross nurse both German, and an Italian Lieutenant. These three persuade the others to give up their task and follow them in search of the tomb of Pharaoh Cambyse and its fabulous treasure. But an ancient curse lies on the gold, which causes the death of whoever finds it. Only the English major, the American lieutenant and the nurse survive. The two officers, although succeeding in blowing up the deposit, are killed; and the girl, left alone in the desert, cannot escape her tragic destiny.