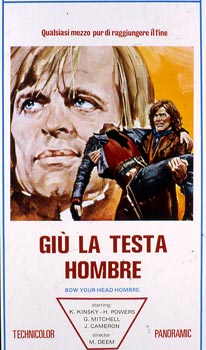 Macho Callaghan is a lieutenant in the Federate Guards and his job is to capture Butch Cassidy. Ironhead, and their band of outlaws. Getting in touch with Ironhead, Macho finds a way of being hired by the outlaws. But when the two leaders quarrel and decide to separate, Macho manages to convince Ironhead to attack Butch Cassidy. In the fight the two gangs are destroyed. Ironhead, the only survivor, tries to escape with the loot but Macho stops him by killing him and thus concludes his mission.