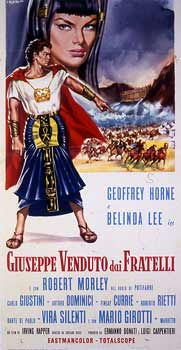 Ancient Egypt: Joseph is sold by his mean brothers as a slave. Bought by king Putifar, the young slave will soon show his great virtues and, in spite of the queen's rivalry works his way up to a high rank position. Named administrator of the king's food supplies, Joseph distributes food to the poor in times of famine... Not recognized by his brothers, Joseph asks them to take their father to the palace... and only in front of him he will reveal his identity. His dream had come true!