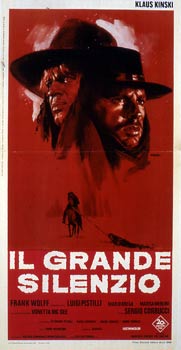 Border with Mexico, 1896: snow has fallen and outlaws living in the mountains come down for food. Many of them are killed for money, but somebody is taking their defence, a mute man called "Silence"! Pauline asks him to seek revenge for her husband and killer-leader Tigrero is arrested. Having murdered the sheriff, the criminal escapes prison and once having found Silence, it is time for a final duel... Not satisfied with having shot him to death, Tigrero lets his cruelty out on Pauline, who was desperately crying over his lifeless and bleeding body...