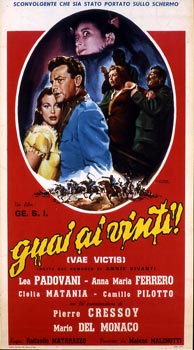 Set in Italy during World War I. Luisa and her sister-in-law are surprised in their villa by an enemy patrol. They are both raped. Later they discover they are both pregnant and are beset by the problem of bearing children conceived in hate. Luisa tries to commit suicide, but is saved by a priest and an understanding doctor, knowing the psychic pressure under which she is, performs an abortion to rid her of the child. Her sister-in-law, however, cannot bring herself to do the same and gives birth to her child, but she has to pay a bitter price for it as she is beaten by her fellowmen who call her a traitor. Her fiancè deserts her, and in the end she dies after a beating. While she is dying, her fiancè with a magnanimous gesture "forgives" her for a wrong that she is not guilty of and promises to take care of her child. This film shows the lack of compassion of those people who have appointed themselves judges of the behavior of others.