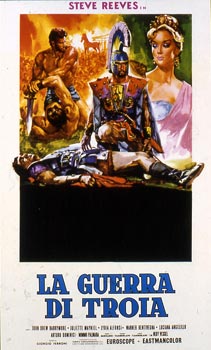 Having finally reached Troy, the Greeks lay siege to the city. Ten years have passed since the Greeks first arrived on Trojan soil and Ulysses's cunningness was worth more than the courage of the defenders. Not being able to take Troy by force, he works out a marvellous plan: he insists that the Greek army, tired of fruitless siege, should retreat from the shores of Troy and sail for their native land. Furthermore, in order to ensure a safe return, an enormous wooden horse has been left on the beach-but full of armed warriors. The Trojans are so curious that they drag the horse inside the city. During the night, at a given signal, the warriors descend from the belly of the horse, the ships lying hidden behing the island of Tenedos come back to the Trojan shores and the city is set on fire. The citizens are cruelly massacred. The fall of Troy presumably took place in 1148 b.c.