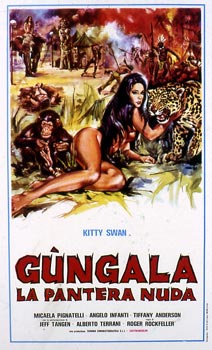 A fascinating film telling the story of a contemporary young girl who has lived with the natives and wild animals of the jungles of Equatorial Africa since she was a baby. Naked and free as other inhebitants of the forests, her sense of happiness is great enough for her to cast away her claims to wealth and civilized life when it is offered to her by the expedition sent in search of her and her parents, who were killed during an expedition fifteen years earlier. The only survivor, the baby Gungala, as she is known by the natives, grew up as one of the graceful and natural creatures of the wilderness. Unfortunately, Gungala wears a very valuable diamond around her neck, which the fierce Machenda tribe wishes to possess in order to finance their fight in the name of the African nation. She is trapped but saved just in time by the new expedition. A most enjoyable voyage into the world of fantasy.