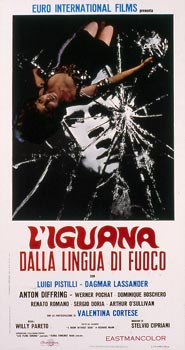 A woman is found dead and horribly disfigured in an embassy garden in Dublin. In the nightclub where the ambassador's daughter, Helen, often goes, another murder takes place: here, too, the victim is a young woman, her throat has been split. The murderer must be some kind of camouflaged iguana, living in the midst of society. Young Norton meets Helen and falls in love with her. He takes her home to introduce her to his mother and daughter. One night, while Norton is out, Helen comes to his house armed with a razor and tries to kill the two women. Norton gets back just in the nick of time but, as he wrestles with his lover, he realizes that she is not Helen, but a man in disguise. The mystery deepens.