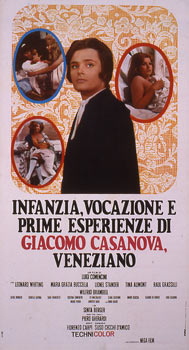 Orphan Giacomo Casanova, abandoned by his mother, is taken under the protection of father Gozzi, who has noticed his great intelligence and starts him off to religious studies. Back to Rome as an abbot, his vocation is shaken when several women show him their interest! Initiated to love by a prostitute, Giacomo has an affair with a young Countess destined to enter convent...Renouncing definitively to religious life, Casanova starts his long and famous career as an impenitent and charming libertine...