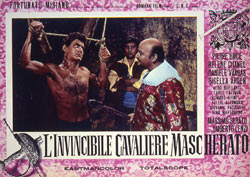 1670 - Rich Don Luis, having escaped the pestilence in his country, kills the representative of the Government and plans the wedding of their children... to get his hands on the Governor's wealth! A mysterious masked knight arrives in the village, in spite of the plague, to stand up for the rights of the poor! His intervention upturns Don Luis's plans and... once the evil Don Luis has been eliminated in a dramatic duel, the knight reveals his true identity... A brave Spanish officer!