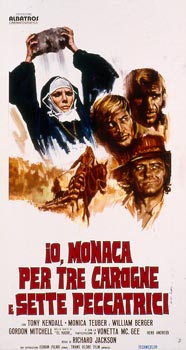 Sister Maria, a young nun, is in charge of a group of girls who, as a result of various crimes, find themselves in prison. In her aim to render their lives less harsh and further their moral redemption, Sister Maria succeeds in persuading the authorities to allow seven of the girls to work in her convent during the daytime. However, the girls manage to escape. Feeling responsible for their fate, Sister Maria convinces the girls to take her with them. The girls fall into the hands of a pimp but they manage to get free with the help of the pimp's associate, Jeff. Since it is impossible to reach the frontier by the normal routes of communication, the small party ventures on crossing the desert, braving its dangers and the assaults of the local inhabitants. During their dramatic journey, the girls suffer physical and moral violence, which restores the moral principles they had forgotten. Sister Maria sacrifices her life to save the remaining girls, who not only reach freedom but are also ready to begin a new and less selfish life.