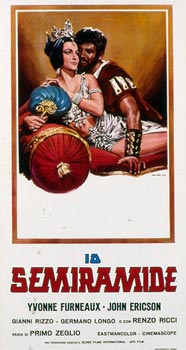 Semiramis, Queen of Assyria, leads her kingdom to great splendour. Among the beautiful things she has built is the magnificent town of Babylon. She lives with Kir, with whom she is deeply in love. Fate has it that he has become a slave even though he is a king himself. One day Kir is kidnapped and he believes Semiramis to have plotted against him, so he wants to take his revenge but dies in the attempt. Semiramis desperate without her love, decides to kill herself, too, drinking from the same goblet that had killed her lover. A very passionate and moving film.