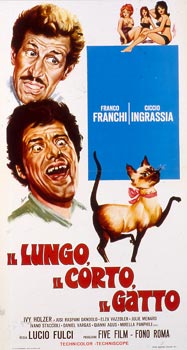 A rich widow finds a siamese cat in her husband's funeral chamber. She is convinced that it is his reincarnation and orders the servants, Gina, Franco and Ciccio to serve it as though it were her husband and to address it as "sir". When the extravagant widow dies, she leaves the house to Gina, and all her other possession to a charity which must pay Ciccio and Franco a certain amount of money each month as long as they look after the cat. By the time the two servants find this out, they have already chased the cat away. They try to find it but get mixed up in a plot to kill the prime minister of Guarany, Ordonez. The man behind the plan is called "The Cat". As a result, Ciccio and Franco get caught up in all sorts of adventures in which they nearly lose their lives through their own incompetence. However, they finally manage to unmask the assassin and find the siamese thereby assuring themselves a nice fat pension.