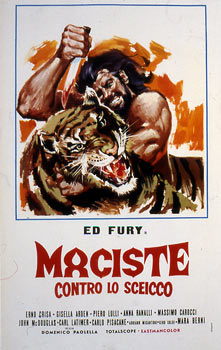 Young Spanish officer Antonio asks Maciste to free his beloved Isabella, kidnapped by a cruel Sheik. Having arrived in Africa, our hero finds the girl but learns - strangely enough - that she is willing to marry the Sheik! Discovering that she is doing so just to save her captive father, Maciste succeeds, after many dangerous missions, in bringing them both back to Malaga, safe and sound! The Duke regains his rightful throne and his daughter will marry her sweetheart Antonio